* Exporting Address field In FH to Description Field in FTM

Importing from or exporting to another genealogy program. This is the place to ask.
Post Reply
4 posts • Page 1 of 1

Exporting Address field In FH to Description Field in FTM

I am using the Export Gedcom Plugin to export a tree from FH 7 to FTM 2019.

Everything seems to export just the way I want it except for the Address field in FH. I put things like Cemetary names, Districts, etc. in that spot. That field (the FH address field) seems to get lost in the export. Is there a setting in the plugin I should be changing? (I have it set to the default for FTM 2019 except for the weblinks and media). 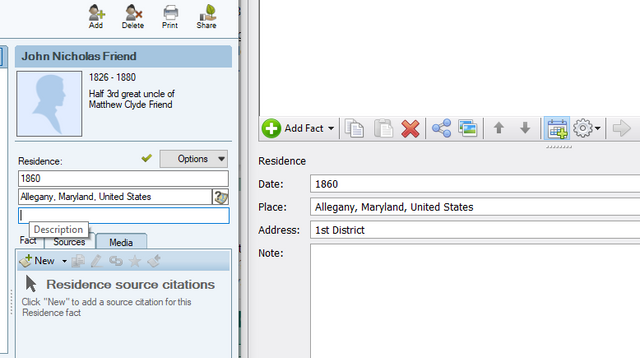 The default setting on the Extra Options tab is Fact Address 2 ADDR: Move to Event Value ( FTL FTM ) on the right.
That should put the Address in the fact Description so I don't understand why it is not shown there.

If that option is set differently then use the Reset these (FTM+) Options button on that tab.

An alternative is Fact Address 2 ADDR: Move to Pace Field ( ANC- ... TPT ) that should insert the Address in front of the Place.

( Not that it matters but I'm not sure what you mean by the "weblinks and media". )

Unfortunately, I have not bought FTM 2019, so rely on others to check the options work OK.
Can you check that the exported GEDCOM has the following for that fact:
1 RESI 1st District
2 DATE 1860
2 PLAC Allegany, Maryland, United States
Mike Tate ~ researching the Tate and Scott family history ~ tatewise ancestry
Top

Hi Mike, I re-exported the tree again and it's working now. I'm not positive what 'fixed it.' When I originally exported the gedcom, under preferences for FH I had the "Exclude fields that are not valid for Gedcom 5.5.1 checked, and "Exclude" selected for Other Applications's Gedcom Extentions. I set it to load where possible and unchecked the exclude fields that are not valid... and it worked. I then set them back on and it still worked so I'm not sure of the issue ((( I had originally imported this tree as a gedcom from RM 8 and had turned those on and saved the project file to clear out the massive amount of 'junk' that came over in the gedcom). Anyways it is good now.

When I mentioned the non-default settings: the link you had created for the Subsidiary Note ("Weblink to _LINK URL (FTM) I set for the links.
The "Media" setting on the basic options page I always set to (File~REL) Use Existing Media FIles with Media Record Existing Paths" Since I have my media all in sub-folders that works great for me because the media doesn't get renamed, and can stay in the folders I organized them in

Matthew, the FH Tools > Preferences > File Load/Save File Loading Options you mention only apply to importing into FH from another product such as RM8. So they should have absolutely no impact on exporting via the Export Gedcom File plugin.

Return to “Importing and Exporting”